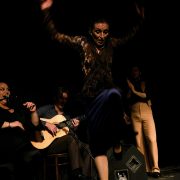 Flamenco Express is a touring dance company presenting established and emerging flamenco artists to UK audiences in elemental performances true to the spirit and conviction of flamenco.

Formed in 1994 Flamenco Express ran Club Azul, London’s first dedicated flamenco theatre until April 1996 when we became permanently based in Greenwich Dance Agency. We have been on the road ever since with over 1000 performances and workshops in more than 700 venues and festivals including the Jerwood Space, Déda, The Curve, Laban, Sidmouth Folk Festival, The Hackney Empire and Bath Theatre Royal..